How Electronica Became the New Grunge

Digging a Hole with
The Chemical Brothers
May 21, 1997
By Brian Bentley 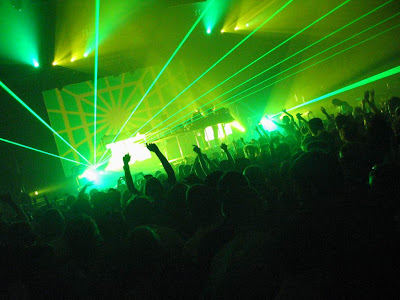 It's 1997. For those who wondered when Techno would finally be swallowed whole by the mainstream, this is your year. Whether you prefer ambient, trip-hop, trance or acid jazz, Electronica has a lot of people dancing in the streets. Critics and the music press are hungry for a movement that can rival the energy and right-nowness of early Grunge. There are a lot of intriguing new acts out there (details to follow), but The Chemical Brothers are Electronica's rock stars, and this has made them the object of great expectation.

Media overkill has panicked record labels. Nervous executives with visions of a Nirvana-like feeding frenzy, scramble about in search of the next Chemical Brothers. TV commercials feature techno and house as musical beds. Just ask Kennedy, the former host of MTV's recently-cancelled, Alternative Nation. Break-beat is the new rock for burned-out metal/punks who've decided it's better to join the universal party than bang your head.

Electronica may have exploded this year, but it's been with us, in one form or another, since the first synthesizer. Pink Floyd's "Interstellar Overdrive" was a dance hall staple in 1967. Emerson Lake and Palmer, Yes and King Crimson founded prog-rock. By the mid 70's, artists like Brian Eno were sculpting ethereal soundscapes that paved the way for all things ambient. Tangerine Dream scored major film soundtracks. New Order made ridiculously catchy new wave dance music, and industrial acts like KMFDM injected churning goth/metal into the mix. By the early 90's, Astralwerks had emerged as the record label that represented the meat of the genre, much like Sub Pop had done for Seattle's music scene a few years earlier.

So what does this mean to punk rock and indie music lovers? Need we feel threatened by the glow sticks and jazz-like dispensing of concrete lyrical themes? Epitaph Records Prez Brett Gurewitz recently lost his precious sense of humor when he dismissed Electronica as "a lot of garbage." This thinking seems beside the point and very 1994. The better move might be to collect your significant other and any recreational substance you enjoy and take a break from verse-chorus-verse, three minutes and out, whiny post-punk rock. Who really needs The Muffs, anyway?

A couple of weeks ago, I was at the Shrine Expo Hall in L.A. to see The Chemical Brothers show with Vegas openers, The Crystal Method. Something about the night felt surprisingly substantial, like a breath of very fresh air. There was a lot of tie-dye going on, but it wasn't the indulgent hippie, smelly Deadhead kind. The crowd was a mix of "normal" people: Industrial Siouxie girls, Manchester types sporting hats, college students and assorted ravers. Everyone was dancing with their neighbor and the pot smoke hung in the air as perfectly as the block rockin' beats. 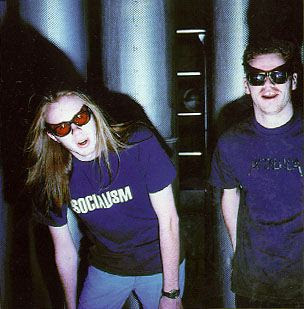 The show's focus was obviously on the Chemical Brothers' new album, the mind-blowing, Dig Your Own Hole, which features a sound as thoroughly original and never-before-heard as Beck's Mellow Gold. Combine N.Y.C. Grand Royale vintage hip hop with psychedelic techno and elements of hard rock, and you get an idea why the Chemical Brothers have arrived at the perfect time. Like Nirvana, they bust genre stereotypes wide open and sell a lot of records. On their heels, expect an onslaught of keyboard-equipped wanna-be rock stars wielding computers and turntables. Whether the current Electronica craze will endure, is up to the same vagaries that created Grunge with Soundgarden and let it evolve into Seven Mary Three. One always hopes for the best.

But the fact is, with a new millennium only 30 months away, it's time to open your mind and embrace something entirely different. Musical bigotry is counterproductive to growth. If you've got a hundred bucks and want to be entertained, pass on those two tickets to the Staind tour and head for your local record store. Be on the lookout for anything on Astralwerks or the Deconstruction labels. Take home the first Chemical Brothers album, Exit Planet Dust. Scour the bins for the latest from Orb, Orbital, Underworld, Daft Punk, The Future Sound of London, Kraftwelt, or try the compilation L.P. Wipeout (on Astralwerks), which features many of the before-mentioned groups.

Remember, both Tim Leary and Heaven's Gate guru Marshall Applewhite believed that technology and mind-expansion could lead to higher consciousness. Look where it got them. Grunge is as tapped-out as an empty beer keg in a rainy backyard. Move with the flow and let the flow move you. Enjoy Electronica while you still can. Before you know it, Grunge will return in force as retro music and everyone knows punks can't dance.