The BCS Finally Passes the Test
January 14, 2011
By Brian Bentley 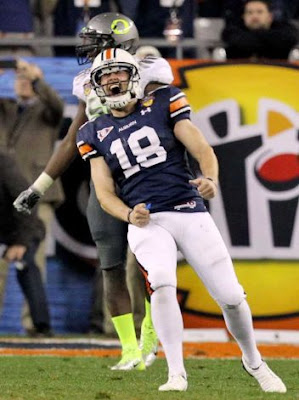 It has taken a dozen years to get it right, but 2011 will be remembered as the year that the BCS title game finally turned college football’s equivalent of the Super Bowl into a bona fide institution. Oregon and Auburn, the two best unbeaten teams in the land, met in a match-up for the ages – and this time the game surpassed the hype.

College football is a dizzying pastiche of sport, war, tribalism and goofy clothing. Students, parents, teachers, alumni, academics and action junkies outfit themselves in school-based color schemes too hideous for even the most fashion-challenged Wal-Mart shopper. Nowhere, outside the world of street gangs, does the shade of a man’s shirt more distinctly mark him as friend or foe.

The 2010 BCS season was the most exciting year the game has ever seen. It came not a moment too soon, as many fans have been turned off by the callous nature of its professional counterpart. Jaded pro football players hop from team to team to chase the dollars with zero loyalty to their franchises or the fans. Dog killers, weenie flashers and chest-thumping, helmet spearing egomaniacs get only a slap on the wrist for their ridiculous antics. It’s all about money.

There are some things you can’t put a price tag on. College football has been the direct beneficiary of the excesses of the NFL. Players at the college level are theoretically not supposed to get paid, and preserving tradition and pride, more than individual performance, are the barometers of success. Call it purity if you like, but it’s something tangible that can be sincerely felt by everyone involved. It doesn’t hurt that the caliber of play has never reached so high.

Glendale, Arizona on a brisk January night was the perfect setting for this juicy BCS showdown and the inevitable partisan politics that pitted red state vs. blue. The Auburn campus is in Alabama and the Oregon home base center is Eugene, possibly the most laid back (to the point of being asleep), progressive city on the West Coast. The nature of football, being a Southern obsession, brought out the worst aspects of the good ol’ boy media. At the eleventh hour, Oregon suddenly was regarded as a feisty, overmatched team that would make a good, if futile, showing for the wimpy liberals in the Pac-10.

(Being as Oregon is where I went to school, it seemed appropriate that I submit my own take on the game. Play by play accounts of the action can be found anywhere, so here are a few points I haven’t seen in the typical media reports.)

The general vibe of pre-game warm ups is often a precursor to what will happen after kickoff. In this regard, size really did matter. On first glance, the Auburn Tigers were an 11 on the intimidation scale. They appeared to be a size and a half larger than the Oregon Ducks – virtual redwoods with helmets. I don’t know what they feed ‘em down home in Alabama (steak and steroids?) but these were some very big boys. During the regular season, Oregon had demonstrated frightening speed and deception along with near-flawless play execution. The fact that both teams had averaged about 50 points a game and dismembered their opponents led everyone to believe this would be a high scoring affair.

So what happened once the game finally started after a 37-day layoff from the end of the regular season? Neither team scored a point in the first quarter. The expected offensive shootout never happened. This long hiatus paid off in preparation for both defenses, especially the Auburn defense, and the explosive Oregon offense – which runs largely on rhythm and timing – could not get out of the way of its own webbed feet.

Running back, LaMichael James, the 5’ 9” Heisman Trophy candidate, was like a body surfer running smack dab into ten foot breaking waves as he was continually knocked back by Auburn’s unyielding front line. The Oregon running game sputtered and sank as the Auburn linebackers and their secondary filled every gap and seam that the Ducks needed to complete the quick passes and pitches that are at the heart of their spread option offense. During the regular season, James averaged 153 yards a game. In the BCS he gained a measly 49 yards, most of them on two runs.

Oregon quarterback Darron Thomas, who is an instinctive genius at making quick reads of the defense, seemed to be handing off in slow motion. Usually, defenses get real confused by the misdirection, unable to figure out who has the ball. But like a shell game on the boardwalk, where the customer keeps guessing correctly which shell the peanut is under, Auburn keyed on the ball, not the man, and Oregon could not get their offense in gear all night. Part of the blame had to lay with Thomas. He floated some horrific passes over the heads of wide open receivers and he looked bug-eyed and a little overwhelmed, trying too hard to recalibrate. 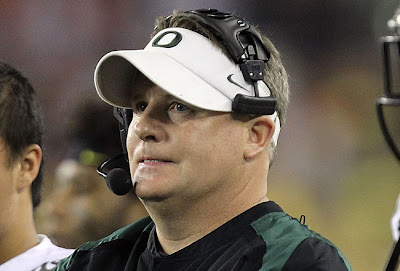 The Ducks brilliant motivator, head coach Chip Kelly, a riverboat gambling bad ass, single-handedly tried to win the game from the sidelines. He almost did. Oregon faked an extra point kick and pulled off a two-point in-your-face conversion with that “we’re just fucking with you because we can,” attitude. Later, the Ducks faked a punt and threw for a first down. Wide receiver Jeff Maehl, the most unknown, clutch performer in the Pac-10, was a one-man Duck army, catching an 81 yard completion across the middle, downing a punt inside the ten yard line and snaring a two-point conversion to tie the game with less than 3 minutes left in the fourth quarter. “That little white dude is the fastest guy on the field,” was the remark of the bar patron behind me.

There were only two problems with Oregon’s good intentions – Nick Fairley, Auburn’s somewhat dirty All-American defensive end and Cam Newton, the Heisman Trophy-winning Auburn quarterback with the scheming dad. These guys were seriously painful for Oregon fans to watch. Newton repeatedly broke free from containment behind the line of scrimmage and scrambled for first downs. Fairley was a cement post with shoulders, stuffing himself on roast Duck and road-killing numerous Oregon drives by body slamming James and running back Kenjon Barner (on a critical fourth down goal line stand) to the ground. These two guys made the difference and especially, in Fairley’s case, there was no getting around it.

Despite all the Oregon miscues and squandered opportunities, Auburn was only up 19-11 heading into the fourth quarter. The Ducks had plenty of reasons to think they could pull out one more drive and a two point conversion to tie the game. The Oregon faithful in their ghastly pee yellow t-shirts needed it. The two-point Vegas spread favoring Auburn needed the sweat. The Pac-10, which had not sent any team to a national championship game, other than USC, since the days when O.J. was still shilling for Hertz, needed it. And most of all, the freaking BCS with their dad-gum computers confusing the shit out of everyone needed this game to go into overtime. It wasn’t as if the Oregon defense hadn’t played their asses off all night. Linebacker Casey Matthews, with the Hercules long hair, and supremely talented defensive end Kenny Rowe had been bird-dogging Cam Newton all night, leaving him a miserable limping mess, more like a Fig Newton – stripping fumbles and sandwiching him to the turf on multiple occasions.

So the Ducks mounted one last drive to tie the game and pulled it off with a two point conversion pass in the end zone corner to Maehl with 2:33 remaining. But it was not to be. Auburn, aided by a fluke play, drove the length of the field to kick the winning field goal with no time left on the clock. 22-19 was the final score and the Ducks had to settle for just a 12-1 record this year. The game was so close throughout; the casual fan had the feeling that if it had stretched another two quarters, it would still have been anyone’s contest to win.

Almost immediately, the ESPN network nimrods weighed in with their overly-simplified insta-analysis about how the result was a foregone conclusion. Senile as batshit Lou Holtz crowed that Auburn was “a team of destiny.” Fellow pompous ESPN windbag Mark May, chimed in that Auburn had “out gutted them when they had to.” In the midst of this SEC post-game bacchanal it was left to the network’s best analyst, Kirk Herbstreit, to defend the Pac-10. He challenged obnoxious Alabama head coach and rent-a-pundit Nick Saban, with the notion that Oregon had proved such a scary headache for Auburn that the Tigers, had, in fact, stopped attacking on offense, and by the end of the game were hanging on for dear life.

Several game-deciding factors cannot be overstated. The Oregon coaching staff suffered a brain freeze quack-up in the second half, stubbornly sticking to a straight ahead running game that was just not working. Inside the red zone, a simple play action toss to a tight end at the right moment might have forced Auburn into catch-up mode, instead of the other way around. The field itself was a friggin’ mess with sloppy dirt clods uprooted by both teams, and it hurt Oregon’s speed the most. The groundskeeper should be put on one of those community watch programs reserved for pedophiles and not allowed within 100 miles of another BCS match-up. It was said that the grassy turf was actually imported from Corvallis, Oregon (maybe this was the Beavers payback for losing the Civil War a month earlier).

The momentum from the hubris and hype that carried Auburn into the game was perhaps what made them finish it the way they did. These guys just expected to win and their sense of national entitlement was palpable. Yet, the stubborn Duck defense held the Tigers to only three points in the second half until the final field goal ended it too soon and for good.

Somewhere in the inky darkness of the Arizona desert, they are cleaning up the detritus from the greatest BCS title game ever. The funny duck-head hats will return to Eugene for a very long winter and the Oregon faithful will have eight months (and maybe an eternity) to ponder what might have been. But it promises to be an exciting summer as most of the team’s line-up (including LaMichael James, Darron Thomas and that push-up pimpin’ Duck mascot) will be back next year and Oregon has some seriously sick draft commitments, probably the strongest in the Pac-10. This will come in handy since few would pick them not to repeat as Pac-10 champions. It’s still the Year of the Duck. And by the way, the Super Bowl is coming up in a few weeks. It will have a tough act to follow.

Web Host
Posted by Brian Bentley at 10:10 PM No comments: