Visiting The Ghost Of Kurt Cobain

Love, Loss and the
Greenhouse Effect
September 1, 1995
By Brian Bentley 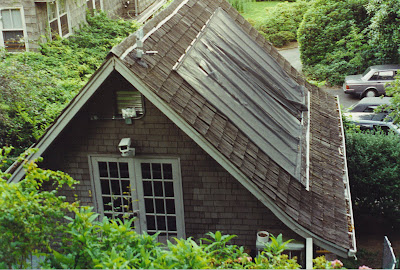 The greenhouse behind Cobain's residence outside Seattle
Photo by Brian Bentley

Labor Day weekend is the official end of summer. As September arrives, families everywhere hit the road for one last vacation before it's back to school and work.

It's twilight on a warm "getaway" Friday and I'm outside the house where Grunge God Kurt Cobain lived and died. The world wants to immortalize the legend and forget the person. It’s impossible to do that when you’re standing in his backyard.

Thousands of people have gathered in this little green strip of land, a 100 by 150 foot "park" on East Lake Washington Drive in the upscale Seattle suburb of Madrona. I know. I saw them – puzzled fans huddled in the rain for MTV's Week in Rock reports.

Nobody is around but me right now. It's green and lush and quiet like a cemetery. You can hear the crickets chirp down by the lake, about 150 yards away. After all the crowds that amassed here, it feels strange to be alone in such a notorious place.

I stare at the landmark to a fallen idol, the garage/greenhouse where Kurt Cobain blew his brains out with a shotgun. It perches so close, so open and vulnerable, just like the man, spitting distance from the edge of public property. It looks smaller, less significant than I imagined.

The garage sits behind the main house, up a 100 foot winding driveway, totally obscured on all sides by foliage, except from the park side. And these bushes have grown six feet since the pictures taken just 18 months ago. Soon, the house next to Madrona Park will be sealed from public view.

Then I notice the curtains in the second story bedroom window. Vintage Victorian they are, all frilly and doily patterns perfectly suited for Courtney Love, the queen of Baby Doll punk. How long have they been there I wonder? She probably put them up when Kurt was still alive, when Francis still had a dad, when Courtney and her "knight in shining armor" enjoyed the only real family they'd ever known. Now the curtains just looked kind of sad and clichéd, the way Courtney looks these days when she's not making music.

I walk up the steep concrete steps at the rear of the park. Every square inch of undeveloped land in Seattle is covered with trees. It's dark and spooky in here. I emerge onto a winding, hilly street that would not look out of place in Laurel Canyon, California. Approaching the back fence of the property, I can hear the jingling of guard dog choke collars and the muffled voices of two men far away. Like a paparazzi shooting Hugh Grant, I lift my camera and muttering that I don't have a wide angle lens, snap a quick shot of the garage and the newly mounted security camera. Immediately, as if on cue, the dogs come running, too late.

So I head back to the lone bench that sits like a monument at a state park. Fans have scratched into it their reasons for forgiving and never forgetting the man who didn’t know when to quit. "Even in his youth he was something," quotes one of Kurt's best lyrics, not coincidentally about another dysfunctional American family. Some of the inscriptions sound really lost.

All by yourself in this vibe-heavy place, one almost feels a strange tinge of possession, like you’re channeling the dude in his sacred burial ground. But in contradiction, the scene is also completely ordinary. A big empty house owned by a rock widow who lost her husband way too soon – sad and not romantic in the least. In real life, Selena and Elvis are dead too, dust and dirt, nowhere near immortality and huge merchandising profits.

It was time to find my way back to wherever I had come from and bid so long to the Nowhere Man of 90's rock. But he was more than a media label. Kurt had it all. As a songwriter he was in the same league as Neil Young or Bob Dylan. Both those cats knew it too, as did Michael Stipe. Music Gods always seem to appreciate it the most when someone new has earned admission to their private club.

I take a few last photos. The twilight is fading, the bugs are taking over, and Graceland West is shutting down for the night. Suddenly, I hear the hum of a Mercedes as a car enters the gates. Is it Courtney, stopping to pick up some things before heading off to that Labor Day rock festival at the North Pole?

On my way down the grassy knoll, two boys outfitted with crash helmets, the kind a kid from the 60's wouldn't be caught dead with, pull up on their bicycles. "Isn't that Eddie Vedder's house?" one asks. "Yeah...it is," I say. Just then a car full of teenagers passes by and one of them shouts "COURRRTNEEEY” into the distance of the still, lakefront air.

Consider the paranoia that can come with fame and the constant intrusion from people who think they know you. As for the rock widow, I've always believed in her music, figured it was coming from the heart. Everyone can relate to shitty parents, the sense that you must somehow recreate a family of your own. Courtney failed so bitterly to pull that off. I admire her for showing respect and not selling the house off overnight, like it was diseased. I would not want her as a houseguest, but she does tackle everything head on, stares it in the face and has a drink with it. She doesn’t run.

I walk back to the car with a weird sense of self-fulfillment, of finally making the trip and paying respects. And I realize how glad I am to have seen this place, not in the carpal tunnel of TV, but in the three-dimensional reality of smell and sound, color and shape. It’s true. You can find anything you really want to find in this world. Sometimes that includes peace.