Gimme Back My Rock Stars
Lynyrd Skynyrd vs. Emo
June 21, 2009
By Brian Bentley 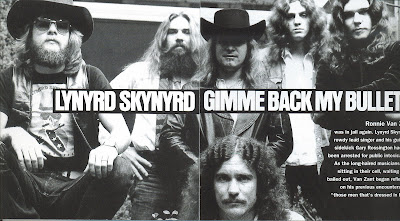 Back before Axl Rose got botox and boy musicians wore gay sweaters with reindeer patterns and played in coed Emo bands with long goofy names, there was something called a “rock and roll star.” A rock star was somebody like Robert Plant or Paul Rodgers or Keith Richards or Keith Moon. There was no specific criteria for these individuals except that they did not look like anyone else you might see in a typical day. A rock star usually wore very tight clothes that barely concealed his package and if he did not have an enormous cock, he lived every day like he did. He was not sensitive or particularly introspective. In many ways he was an animal who got by on instinct – the darker the instincts the better. The instinct for survival was the least important.

Bon Scott, the original vocalist for AC/DC, the fellow who wrote the lyrics to “Night Prowler,” the song that inspired serial killer, Richard Ramirez, was such a rock star. Bon, like Jesus, died at 33 years of age. They found him half frozen, behind the wheel of a car parked in the snow, eyes wide open with a whisky bottle clutched in his mitt. It was the perfect and logical ending to a script Bon had been writing for years. He lived and ended his life in harmony with the elegant art of self-negation that had become his musical canon – fast women, faster cars, too much booze and a band of brothers who saw themselves as a small army that would conquer the music world or die trying. It’s a long way to the top if you wanna rock n’ roll.

That was decades ago when rock music meant something. It was back when performers like Bowie and Kiss resembled extra-terrestrials from another planet, not the guy who works as a checker at Vons and still lives with his parents and wants to date an actress and get written up in US Weekly. It was back when musicians had original ideas and dressed like the royalty they were. The geeks were the spectators in the audience, not the guys playing the instruments. If you got up in front of the wrong crowd in the 1970s with a name as queer as Clap Your Hands Say Yeah, you might not make it out of the building alive.

Today, it’s a different tune. What passes for rock music is more theater than reality. Image is all that matters. Punks may resemble Sid Vicious, but even a maniac like Pete Doherty seems to exist simply to work the ACT of being a rock star. Hard rock and heavy metal are genres stocked with fashion poseurs who look about as tough as a runway model in a studded leather jacket. Exceptions can be made for the dudes in Queens of the Stone Age, a few Southern bands like Mastodon, and certain former members of Nirvana. At least they are real men.

Thirty five years ago, before the Freedom Rock infomercial, there was a group called Lynyrd Skynyrd. You might remember them for the hit song “Sweet Home Alabama,” which later became a chart-topper for Kid Rock and a soundtrack mainstay for countless Indie films. On October 20, 1977, a chartered plane carrying the members of Lynyrd Skynyrd, their wives and girlfriends, senior tour crew members and their road manager, crashed into a swamp near McComb, Mississippi. The crash killed four members of their entourage, including two band members and cut their careers perfectly short (before they could make a jazz-rock album). The original Skynyrd was nothing like the passionless fat clowns who’ve carried on in their name. They were a badass bunch who grew up as street kids in an impoverished Florida neighborhood and had to literally fight their way to the summit of the rock world.

In the beginning, Skynyrd was playing hard, electric blues music similar to English bands like Free and Humble Pie, but it was filtered through Neil Young-quality lyrics and chord structures. These were simple and powerful songs made more powerful by the band’s razor-sharp chops and guitar prowess. Skynyrd was more than just a bunch of guys dressed in flares, playing as fast as they could.

The band’s first three records were produced by legendary Dylan sideman and New York fixture, Al Kooper, who saw them tear up a small club and instantly signed them to his newly formed, Sounds of the South label. Their tour manager was Peter Rudge, who also handled The Who. Skynyrd’s ferocious live attack discouraged other acts from following them to the stage. But a typically fearless Pete Townshend demanded they open for The Who throughout his 1973 tour.

Check out the steely looks of vacancy and determination in the top photo. Four of the six original members of Skynyrd died in separate incidents that seemed to define the concept of the doomed blues man. The short one who looks like punk record label owner, Long Gone John, was lead singer Ronnie Van Zant. The son of a Golden Gloves boxer, Ronnie had a code of “honor” that landed him in jail a dozen times for fighting and public drunkenness. He died in the plane crash. Ronnie did not listen when the wives of the band members pleaded with him to ground their rickety tour plane. Ronnie just said, “When it’s your time, it’s your time.”

Lead guitarist, Allen Collins (second from right), was constantly beaten up in high school for his soft manner and quiet voice. After the plane crash that took away his band, Collins’ wife died of complications during pregnancy. After her death, he gradually disintegrated. Over the years, he was involved in four horrific automobile accidents, mostly involving trees and other inanimate objects. His final car crash killed his girlfriend and left him crippled from the waist down and unable to play guitar. He didn’t drive after that. Collins lost whatever will he had left to live – weakened from barbiturate addiction and constant psychic and physical pain, finally succumbing to pneumonia at 37. 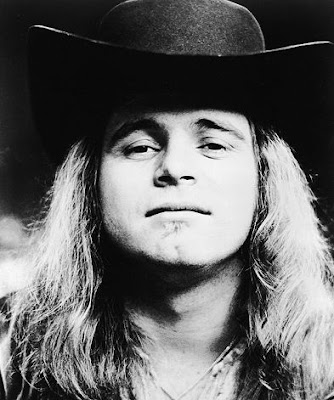 It sounds like a corny cliché today, but in the early seventies, if you wore long hair in certain circles of the South, you were really asking for trouble – physical, life-threatening trouble. Ronnie Van Zant pushed his own altercation envelope, while Lynyrd Skynyrd embraced elements of Dixie danger and wore them like a crown of thorns. Similar to the Death Row rappers in 90's Compton, this was music that sprang directly from life, a byproduct of it, not a jive re-creation. It was thematic inspiration and tortured art that became a living canvas of turmoil, triumph and tragedy. Skynyrd was the embodiment of all things a “rock star” band must be. The plane crash was a sadly fitting coda to a lifestyle of excess, drinking, car crashes and self-destruction that has no parallel in rock history – and you can include the legacies of Hendrix, Morrison, Brian Jones and Kurt Cobain in that equation.

Rock has slowly died in a similar manner of lost potential, but instead of leaving us for good, it’s just morphed into a commodity and another day job. I miss the times when rock and roll stars lived their lives out in their music; when they were in it for real and didn’t sweat the details of retirement. To paraphrase the late comedian Bill Hicks, I wanted my rock stars to be fucking rock stars. I wanted them totally screwed up, on drugs and drink and scaring the shit out of people – with a groupie hanging from one arm and a needle from the other. I wanted to live my life vicariously through them as they took the risks and paid the prices that normal people could never afford. Johnny Thunders and Phil Lynott and Marc Bolan had the right idea. I wonder what they would have thought of Fall Out Boy and the Arcade Fire and the new definition of rock and roll.