The Gift of the
Homemade Mix Tape
December 22, 2002
By Brian Bentley 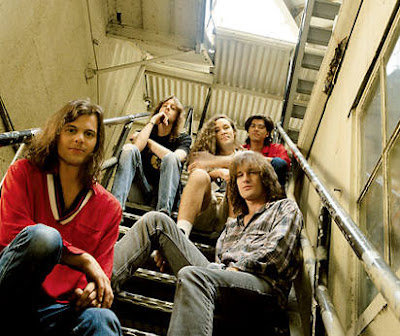 It's a few days before Christmas. As usual, I find myself in the familiar holiday position of being financially strapped, so spending much money is out of the question. Better to give a present that money can't buy, namely some exceptional songs cued in a particularly creative order. There's nothing like a mix tape. That's right, it may be 2002, but mix tapes will always be cool. Digital can't beat the heart and soul of a 90 minute Hi-bias, Dolby B audiocassette.

But first, I want to talk about 3 CD’s I’ve got in constant rotation right now.

First up, is the soundtrack to the extremely underrated film, Jackie Brown. Director Quentin Tarantino one-ups his legendary soundtrack to Pulp Fiction (no easy task). Where else could you find the ghetto grandeur of Bobby Womack's "Across 110th Street" on the same slab with the bubblegum howitzer that is the Grass Roots' "Midnight Confession?"

Next, is the Gin Blossoms first full-length CD, New Miserable Experience, the best folk and country rock album of the 90's, which is saying a helluva lot. It is everything that critically-acclaimed efforts from boring and bombastic bands like Wilco are not – unself-conscious, pure, simple, optimistic, devastated and shot full with the kind of undeniable musical hooks and lyrical profundities that remind the listener of instant classics like Pet Sounds and Rubber Soul. Who cares if the group's catalog wound up on KOST 102?

The story of the Gin Blossoms begins and ends with its founder, Doug Hopkins, an unrepentant melancholic and doomed alcoholic who managed to write one of the 10 greatest songs ever about lost love ("Hey Jealousy") and get kicked out of the band he started the day the album he conceived from the ashes of a broken love affair went gold.

Four months before Kurt Cobain killed himself, Hopkins put a .38 caliber slug into his head. But these days, few speak with reverence about "Doug," like they do, "Kurt," which is unfortunate, since Hopkins was Cobain's equal as a songwriter in every way. He was betrayed by his own brothers in the Gin Blossoms, who forced him to sign away royalties and spitefully removed some of his credits and his photo from the album. But in the end, Hopkins made his point. Without his enormous manic energy and musical spark, the band languished, milking the formula he created until eventually it was an enterprise running entirely on fumes.

Hopkins created a jingle jangle musical landscape of lightness that was a lyrical minefield for darkened, broken hearts. From "Lost Horizon." "I'll drink enough of anything to make this world look new again..." "There was nothing left to say. So she said she loved me. I just stood there, grateful for the lie." This is music that sounds like someone literally poured their life into it.

Another CD I can’t stop playing is DGC RARITIES. One of the most popular compilations of its time, it signaled a record label (Geffen) at the height of its grunge dominance. With seldom-before-heard songs by Nirvana, Hole, Beck, That Dog, The Posies and more.

BEAUMONT'S LAMENT (from Jackie Brown) In this 30-second audio clip, a righteously lethal Samuel L. Jackson opens the trunk of his Caddy to reveal the very-dead Chris Tucker, while explaining his early employee retirement plan to a cow-eyed Robert DeNiro.

I'M TAKING EUROPE WITH ME College honeys that even riot girrrls could love, Veruca Salt teamed with famed Nirvana producer, Steve Albini to chop off this slice of jagged velveteen. A favorite among Eurorail slackers.

SOMEONE TO PULL THE TRIGGER It's doubtful that even vintage-era Fleetwood Mac could have pulled off a more catchy and irresistible ode to self-loathing than this soulful refrain by Matthew Sweet. How's this for getting to the point? "I'm ready and willing, the clarity is chilling, but I'm not asking you to save my life. I need someone ... to pull the trigger. Cause this hole in my heart is getting bigger. And everything I'll ever be, I've been. And I need someone to pull the trigger. So if you're who I think you'll be, if you're who I think I see .. Then shoot."

WILLING TO WAIT Lou Barlow split acrimoniously from Dinosaur Jr. and formed Sebadoh, releasing a series of lo-fi home-produced albums that contained some of the most exquisite vocal arrangements ever to waft from a dorm room speaker. On this plaintive, sensitive-guy tune, Barlow gently asks an ex-girlfriend to dump that jerk she left him for.

TALLAHASSEE As immortalized in Nick Broomfield's drugopic Kurt and Courtney, Earth is a band fronted by the marginally talented, majorly slimy Dylan Carlson, ex best-friend of Kurt Cobain. Carlson wanted to help his insanely depressed buddy, so he bought him the shotgun that ended his life. Or maybe he just gave it to Courtney ... Here, Earth do a decent job of evoking the swirling moodiness of early Pink Floyd.

YOU KNOW YOU'RE RIGHT In this freshly-exhumed Nirvana nugget, Kurt basically lets you know who he had grown to hate in the end (along with himself). With sheet metal vocals that alternate with Stipe-like nasal mumblings, it's apparent that Cobain's perfection of the soft/loud dynamic had reached truly frightening proportions.