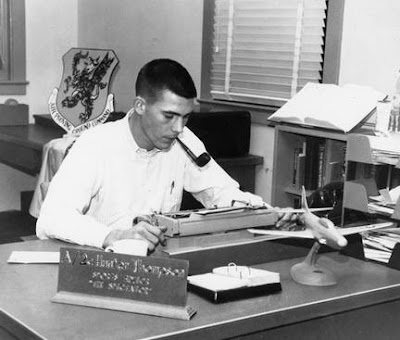 Here’s one of the last stories from the vault left to post. In the summer of 1998, I was in my usual weekly spot inside Spaceland when Steve Moramarco from The Abe Lincoln Story asked me if I wanted to be interviewed for a web magazine. He was writing a column for Word.com about people with weird, out-of-the-way jobs. He’d just written a piece on a bounty hunter. Since I was working as an entertainment copywriter doing taglines for movie posters, it seemed like a good fit. This was the profile that resulted from our long talk.


I write promotional copy for films. Basically, it's just trying to get people motivated to see a movie using elements such as video box synopses, taglines on posters and billboards, press kits and radio spots.

My career started at ad agencies. I got into that because I thought advertising combined creative pop culture with writing that was immediate and impactful. But what I was doing was just dull, plain and simple. I decided to try ad copywriting for the entertainment industry. So I clipped a bunch of movie ads out of the L.A. Times and pasted my own taglines over the existing ones, and then xeroxed the mockup.

I sent these samples out on spec to entertainment agencies, and I got very lucky, very fast. My first assignment was for Dances with Wolves. Against some fairly long odds, and competition from legendary ad agencies with unlimited budgets, my taglines went to finish, and they used my stuff for the teaser campaign and also for the final one-sheet. My fee was low, but after that, things started happening quickly. It's a cyclical business. You'll get very hot and all of a sudden, things will dry up and you'll have to go back and pitch people. But that one worked out sort of magically.

My tag for Dances with Wolves was: "Inside everyone is a frontier waiting to be discovered." It was supposed to be a psychological approach, because they wanted something that wasn't just cowboys and Indians. It was 1990; Westerns were really out of style. In fact, I think that was the reason they gave the job to an unknown – because a lot of people figured nobody would see the movie anyway. So it ended up winning about ten Oscars, including Best Picture of 1990. 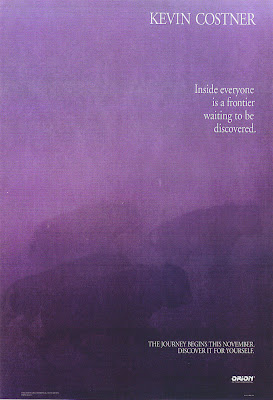 The teaser poster for Dances With Wolves

That was eight years ago, and I'm still at it. I'm freelance, so I do a lot of different stuff, and I've taken breaks from the movies and done writing for the music labels, but mostly it's been movies. What happens is I get a script or I go to a screening, sometimes both. Then I talk to the people in the marketing department, and they tell me what they want, what they don't want, what they've seen before.

I've built this technique for coming up with lines. A lot of it revolves around my own gut instinct. I mean, there are formulas you can use, but you don't want to get too formulaic because you don't want to sound like a cliché. If you see the stuff that's out there, you can tell the people who follow weak formulas. That's why when something comes out that is really creative, it makes an impact with people. Like the movie Volcano – "The Coast is Toast" – that kind of thing. It’s a brilliant tagline that grabs you.

The best taglines play off the title. You also have to consider the theme, the artwork for the poster or the box, and so forth, but everything starts and ends with the title. I'll write long, narrative tags if I think the title is vague and needs explanation, and I'll generally let myself go a little wilder, into more abstract territory, if the title is very straightforward.

I draw up huge word association lists. You have to explore all the various combinations. For the film, Meteorites, my list included words like "meteors, destruction, survival, hope, impact, speed, annihilation," and on and on. I had stuff like "Bad News Travels Fast" – as in speeding meteors crashing into earth. The video box actually ended up with two of my lines on it: Meteorites – "They've Traveled a Billion Years to Destroy the Earth in One Night," and then, to punch it home with a short and memorable line: "They're Going to Rock Your World." When you know in your heart that you nail an assignment like that, the feeling is usually mutual. The client almost always sees the light. Sorry, But I’ve been known to speak in taglines too.

Right now, I do much more home video than theatrical – a lot of sci-fi, which is a huge market. It's maybe also a bit of a fringe market, but, actually the smaller the movie, the less channels of approval you have, so they'll let weirder stuff get through. For Pinocchio's Revenge, that satanic puppet movie, I had "Evil Comes with Strings Attached." (Laughs.)

It’s a fun job. You drink a couple of beers and go for it. The downside is that it's a fairly lonely profession. You're just a freelancer, a guy at the other end of a phone. And if someone like Disney waits ninety days before they even look at your invoice, well, that's just tough. Also, you frequently have only twenty-four hours to deliver your product. When a festival arrives like Cannes, you get three calls in one day and everybody wants it yesterday. Some people might find the pressure to come up with stuff on the spot like that totally insane, they might freeze, get writer's block. But I find it challenging. I think my record was I wrote twenty-five taglines in thirty-five minutes for something. I didn't really know what I'd written after I finished because I was going so damn fast.

Another thing that drives you nuts is negotiating your fee. The problem is that sometimes you are competing with people who want to get a foot in the door in entertainment any way they can, and they're willing to work for spec (free), which I don't do. I mean, I did it when I first started, but it's pretty much insulting. It devalues your work and your reputation. I try and stick to my guns for what I think I'm worth. And if a client tries to lowball me, I'll only agree if I'm just starting out with them. Once they like what I do, then I figure it is worth it for them to pay me what we both know is fair. Because if I sell their movie, the amount of money they're shelling out is worth it. And they know that.

It's a very tough business. There are probably fifty other people doing the same thing I'm doing right here in L.A. All freelancers. It's extremely competitive. I worked on this movie Atomic Dog, a Paramount film that wound up on the USA Network. I had a couple of good lines – "Someone's Been a Very Bad Dog," and my personal favorite "Reality Bites," – and apparently, those lines got framed and put up on a wall in the Paramount offices. I thought that was pretty complimentary, so I called them up and said "Can I work on anything else for you?" And they said, "Who the hell are you?" That's show biz.

If you have thin skin or rejection is difficult for you, I highly recommend getting into something else. In fact, it takes a lot of stick-to-it-ive-ness to freelance anything. I've got to get on the phone every other month and make dozens of cold calls to keep the thing going, because companies downsize, companies get swallowed up, they go in-house. It's a constant challenge to keep contacts current. Fortunately, I've got a couple of clients that have been great to me over the years. They pay well, they're fair, and they’ll even fight for a good idea in a meeting, which is great.

I don't consider myself as someone who works in show business. I work in retail advertising. It's not much different from the guy who toils at Target writing catalogues for Sunday newspapers. In ten years, I just hope I'll still be making a living as a writer, because if you can actually survive as a freelancer, you are a success.

The rewards vary. If I'm out socializing at a club and I tell a woman what I do, frequently, she either thinks I'm making it up, lying or exaggerating. You don't get a lot of recognition, because you don't get a byline. Still, a lot of people see your stuff, and that's pretty cool. Walking into a Tower Video and seeing dozens of video boxes with your work on it is something you can take pride in. I have gone to finish on over 200 films and my portfolio includes the posters and video boxes for Blade, Billy Bathgate, Get Shorty, My Best Friend’s Wedding, and Bride of Chucky.

I just worked on Buffalo 66. It's a really poignant and also mean-spirited film. Vincent Gallo, the director, was a very hands-on guy. I was proud to work with him, even though I had to do ten different rewrites for the box synopsis. The synopsis is your life story for a movie in ninety-five words or less. Like: "Billy Brown is a three-time loser with a score to settle, da, da, da."

If you think about how much money goes into a film, and that the video box customers see in the store is what prompts some to buy it, you can see why studios get very, very, particular about the copy. I would too. Gallo had some concepts that I built on and he didn't like them, and I kept doing them over and over again. I thought I was going to get an aneurysm. But finally, it all worked out great, and it was probably one of the best synopses I ever wrote. I hope it makes it onto the box.