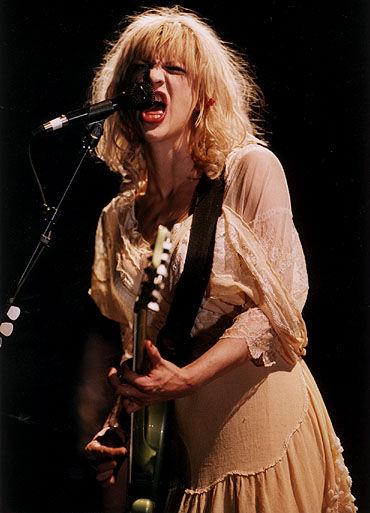 Leave it to Perry Farrell – half industry weasel, half punk visionary – to discover the only guaranteed method of shutting up Courtney Love. Just unplug her. That's what happened, four songs into her scattered and self-indulgent set, opening for Farrell's 90's icons, Jane's Addiction at the Hollywood Bowl. It seems Ms. Love suddenly found herself sans amplification.

With the house lights turned on and her spotlight gone – her microphone as dead as her musical career – Courtney continued to perform for the few dozen unlucky fans still stuck in the front rows. She wasn't playing music anymore, she really hadn't done that all night, she was just performing Courtney. That would include her latest role as the bitter, professional widow whose lawsuit against the surviving members of Nirvana has stalled release of their long-awaited box set and left her with the karma of an American Airlines pilot.

As roadies scrambled about, Courtney refused to vacate the stage, strumming her soundless guitar for the benefit of a few well-paid, nearby flacks like KROQ's briny, Jed The Fish. Earlier, approximately one song before they cut her mic, Love had boldly announced that "Perry just told us we have only two songs left before we have to get off. F you Perry Farrell, we're going to play four!" Courtney's punk pledge fell on deaf ears when, a few minutes later, Farrell bitch-slapped back and cued the house DJ – sending Love into a complete meltdown. Screaming at the members of her band to stay on stage, she was, by turns: shocked, angry, frustrated, outraged, flabbergasted, flat-footed, stymied, thwarted, humiliated, flummoxed, flustered, bamboozled – and most certainly, pissed. All at the same time.

But then Ms. Love got just what she asked for and Courtney always gets what she wants. As for the rest of the show, what more can you say about a line-up including Jane's Addiction and grizzled techno vets, Stereo MC's? Ten years ago, this exact bill would have actually meant something significant, both musically and socially. But tonight, in the vast, acoustically-challenged, half-filled Hollywood Bowl, it seemed to signify little more than the creaky wheels of nostalgia and the methodical flow of commerce.

Jane's Addiction performed with grace and power, although Dave Navarro needs to update his stale, Jimmy Page-isms and add a second guitarist to match the nimble power of the band's rhythm section, featuring drummer Stephen Perkins and bassist Martyn LeNoble. Farrell was his usual New Age, punk, hippie, grand bad-ass self and sang fabulously. The leggy stripper/dancers he employed to ride giant seesaws were politically fine with the crowd because nakedness is really so Jane's.

As the headliner rolled into the night, Ms. Love was obviously long gone into the bowels of the building, perhaps paging her lead attorney to begin drafting civil suit papers. But her mystifying and horribly awkward latest appearance begs for a few helpful career pointers.

BUY A WATCH:
When the venue's set-in-stone curfew is 11 p.m. and thousands of schmoes have shelled out $50 each for a ticket that says, "Jane's Addiction," on it, you might negotiate your set change in under 45 minutes.

REHEARSE YOUR MATERIAL:
This includes tuning your guitar and singing on-key. It also means including actual Ends to your songs that are more than just free-associated rantings in search of a subject.

FIRE YOUR HAIRSTYLIST AND WARDROBE PERSON:
The low-slung, three-inches-below the navel, hip huggers you were wearing looked to be stolen from Robert Plant's dressing room during the filming of The Song Remains The Same. Those pants are as last year as this article.

BEG ERIC ERLANDSON TO COME BACK AND BEG PATTY SCHEMEL TO NEVER LEAVE AGAIN
New guitarist Steve McDonald sounded great in Redd Kross but his thin, uncertain playing has none of Erlandson's confident, sustained crunch. As for Love's longtime drummer, when Courtney announced, "Patty wrote half of the songs on my last record and I didn't let her play on it, so tonight's her chance to redeem herself," Schemel looked ready to crawl inside her kick drum.

GROW OLD GRACEFULLY
Your late husband set a rather poor example, but don't you think it's time you found a new identity to take you with dignity into middle age? Seven long years ago you were associated with one of the best albums of the 90's, and now you're a C-List movie actress. What happened?

How's this? To start with, fire all your lawyers. Give Kurt's music back to his true fans, whose dollars for "Nevermind" helped make you a player. Then quit rock and roll. Start a country band. Tour the country in a smelly van. Live on $20 a day. Sleep with Mike Watt. Sleep with whoever will get the job done. But the one thing you might want to avoid, is screwing with Perry Farrell.