Underneath The Bridge
April 11, 1994
By Brian Bentley 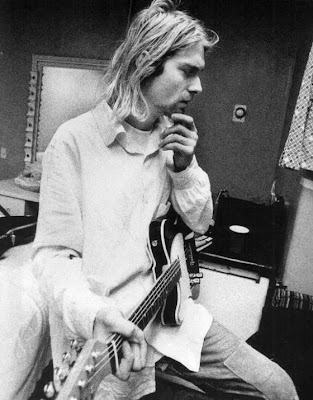 In April 1994, several days after Kurt Cobain was found dead of a self-inflicted gunshot wound, I wrote a fan’s lament to the tragedy. I sent my ideas to editors at several music magazines in hopes of generating an article. Katherine Turman, then editor at the metal mag, RIP, was very supportive.

My mini-feature story never came out, but the meat of it was bill-boarded on the RIP letters page. 17 years later, and Kurt’s death still seems shocking. More than any figure in rock history, his passing marked the end of an era. Of all the ways that Nirvana made our lives better, it was Kurt’s fanatical attention to quality control that meant the most. Not only did he strive to stay true to himself in his own music, but he raised the bar for every band out there. Rock musicians in the 90’s were actively competing with Nirvana and for most, it resulted in the best work of their careers.


This business of dead rock stars was old 20 years ago. Now it's just boring, a cliché that didn't need to include Kurt Cobain. "That stupid club" is how his mom Wendy described it to the press. The likes of Morrison, Hendrix and Joplin make up the club – all people Kurt had little in common with except death at the age of 27.

Kurt Cobain wasn't some pathetic reject from an Oliver Stone movie. His was not a gradual descent into the oblivion of self-pity. He wasn't a burned out, washed-up caricature of former greatness or someone who figured he'd better die before his legacy evaporated. Kurt should have lived to be 90. We could have grown old with him. His wife and baby daughter needed him. The world needed him, not because he was a "spokesman" or a rock God to worship from afar. We needed him because he was none of these things, because he achieved success accidentally, dragged into superstardom kicking and screaming.

It's been only three days since the news of Kurt's demise turned MTV into a 24-hour tribute channel. You can’t look at a photo of the band or listen to their music and think of Nirvana in the past tense. It's impossible to imagine someone as completely vital as Kurt gone. Now the media circus really begins. Captions next to every Cobain story will include the inevitable words "troubled" and "doomed." The name Nirvana will come to represent failed potential, suicide, and, worst of all, fodder for A Current Affair.

Surely, someone will conjure up a chart with diagrams to show the similarities between John Lennon and Cobain. Let's see: 1. They both have the same amount of letters in their first and last names; 2. Same number of letters in their band's name; 3. They both died on the 8th of the month; 4. Both favored pop melodies; 5. Both were small-town lads who hit the big time in cold, rainy swinging cultural meccas (London, Seattle); 6. Both loved heroin; 7. Just when both seemingly had it together, they wound up on the wrong end of a gun; 8. And, finally, both attached themselves to vilified artist wives who are now arguably the most famous widows in rock history.

Kurt once said that he wanted to kill off his career before it got too big. Suicide is the ultimate way of telling the world that no one owns you but you. There will be those who judge Kurt in the harshest of terms because he took his own life. These wise men will conclude that everyone has pressures and only weaklings cave in. But the last thing Kurt wanted was to be remembered as a dead rock star. For all his alienation and anger, he was possibly the most sensitive man to ever sell 10 million albums. And, like all sensitive people, his hurt ran deeper, his doubts loomed larger, his physical ailments became more disabling, his depression more bottomless.

Long after the funeral wreaths and tributes, long after the last Hard Copy expose, long after the Top-40 world has forgotten everything Kurt stood for, there will be his family, friends and true fans. For them, there will just be an empty space. And that emptiness will be there every day, for as long as memories last.

Posted by Brian Bentley at 9:32 PM