Lap Dancing in L.A. Strip Clubs to be Banned? 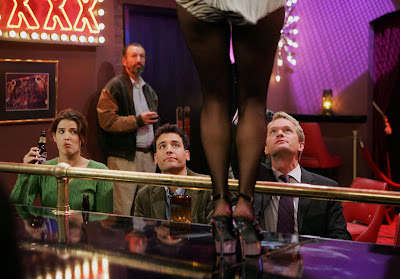 Imagine the thankless task of the undercover vice squad cop assigned to the "Lap Dance" detail. You're in charge of ensuring that exotic dancers in Los Angeles strip clubs remain at least six feet away from patrons at all times. City officials are worried about the rampant spread of what has been termed "prostitution" involving strippers, often fanned by the writhing rhythms of classic rock tunes like Humble Pie's "30 Days in the Hole."

In 2003, sex industry workers in L.A. can't help but feeling manhandled by the long arm of the law. Last January, Hollywood City Councilman Tom "the bomb" LaBonge, managed to sneak through a measure giving local cops the power to confiscate the automobiles of suspected, not convicted, johns caught in the act of soliciting a prostitute. Nobody in local government or the media had much to say in response to this frightening precedent of government seizure of private property, not wishing to appear to endorse the same civil servants of sex who are featured regularly in hit TV shows like HBO's Hookers at the Point.

Obviously emboldened by this slap in the face of due process, the Gestapo of the ID are at it again, this time setting their sights on cleaning up L.A. area strip bars. A group of concerned citizens has helped author an ordinance that will soon be voted on by the city council and the mayor. If it passes, lap dancing in the Southland, the kind portrayed so stirringly in cinematic classics like Showgirls and A Night at the Blue Iguana, will be a crime.

"This will clean up the industry," said Councilwoman Cindy Miscikowski, chairwoman of the council's Public Safety Committee, who proposed the measure aimed at curbing prostitution and other crime associated with the clubs.

Somewhere Charlie Sheen is weeping. Larry Flynt is jumping out of his chair. Where’s Bill Maher and his soapbox when we need him? Didn't we learn anything from the swingin’ 70's? Let's just say that personal freedom and artistic expression are not taking center stage. As for the charge that strip clubs are actually fronting for prostitution, blame it on those old drunks and frat rats who regularly tip a couple of bucks to a dancer at Cheetah's or Jumbo's Clown Room and take her home. I mean, it happens all the time, right fellas?

On the flip side, the ordinance was immediately criticized by representatives of adult businesses as unconstitutional.

"Do we want a society where we're so controlled that we cannot do anything at all, that we can't move in one direction or another?" asked Roger Jon Diamond, a Santa Monica attorney who represents about 25 adult clubs in Los Angeles and who compared the law with prohibitions enacted by the Taliban in Afghanistan.

"What is the city next going to do, say you can't go to a teacher to be taught ballroom dancing?" Diamond asked.

He makes a good point, since ballroom dancing has always been considered a gateway drug to the slow grind. But what is next if this odorous piece of Puritan legislation passes and sinks its draconian claws into our culture? Does it send a signal to other prudes with enough time on their hands, to whine and complain and define for all of us what is obscene? Seems to me that the right to have a sweaty girl gyrate on your lap is protected somewhere in the laws of common sense. Otherwise, we stand to suffer an audit of all half-naked theatrical performers in any public place. My friends are in a band called Nudist Priest. They play naked on stage, with guitars over their privates. I think a full scale police investigation on the taxpayer dime is warranted. At least these salty dudes need to stay more than six feet from their audience.

As usual, nobody seems to notice crazy laws up for debate until it's too late. We’re still sore from that nice wedgie the FCC gave us after it relaxed Broadcast ownership caps (even though a lot of people sent angry e-mails to Barbara Boxer). Strip clubs don't have a road kill's chance of survival in these reactionary times.

Make a phone call or drop an e-mail to your local city councilperson urging them to Vote No on this upcoming bill. Working girls deserve better than to be tossed out in the street. Our local economy needs the revenue ... and lonely guys need a place to buy watered down drinks and window shop for luxury items beyond their grasp.