Rock and Roll High School
with The Runaways

Hollywood It Feels So Good 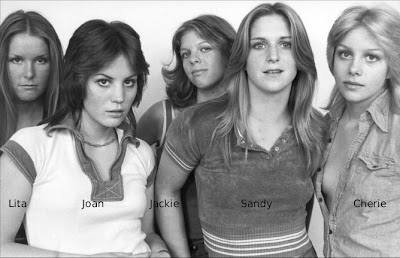 1975 was the year that rock music made a dramatic change of course that would shape its future for generations to follow. The hairy beast of testosterone-fueled Prog was in the final stages of extinction, rendered obsolete by the harder-edged sexiness of Glam. When the glitter inevitably wore off mothership Glam, Punk rock was the baby it left behind. Like an evolutionary process that rewards the hardiest of species, the universal, all-inclusive nature of Punk had a resilience capable of surviving trends. The Ramones gave ordinary musicians the confidence to believe that anyone with a dream and a leather jacket could succeed. Punk opened the door for women like Tina Weymouth to pick up the bass in Talking Heads and Debbie Harry to become a cross-cultural icon with Blondie.

But with the exception of Suzi Quatro, who fronted an all-male band, there were few role models to inspire young female musicians who wanted to play straight up rock and roll. Guitars and drums were still a man’s domain and nobody knew that better than Kim Fowley, a nakedly ambitious songwriter/producer who was scouting the local L.A. clubs to recruit his own all-female version of the Beatles.

One night Fowley met Joan Jett – a hardscrabble punker whose idols were David Bowie and Chuck Berry. It was one of those rare moments when opportunity and talent combine with exponential force to create something potent and entirely new. Jett, who would go on to become the legendary godmother to Riot Grrrls everywhere, was introduced to South Bay drummer and hard-partying tomboy Sandy West. Soon thereafter, Lita Ford, a Ritchie Blackmore-worshipping metal guitarist with curves and bassist Jackie Fox came onboard. Within a few weeks of rehearsals, Fowley knew he had the nucleus for launching an all-out assault on convention – a band of chicks who could play their asses off and use the tools of self-empowerment to fashion themselves as sex symbols beholden to no man.

The very first frame of the new biopic, The Runaways, could not be a better fit for a coming-of-age teenage rock fairytale. It’s a shot of a large drop of blood dropping onto a San Fernando Valley sidewalk. The blood has leaked from the loins of 15 year-old Cherie Currie, a gangly, bleached blonde Valley Girl desperate to build a life apart from her dysfunctional family. When Fowley stumbles onto her at Rodney’s English Disco on the Sunset Strip, the hyper-hustling promoter is floored by her jailbait fashion sense and invites Currie to try out for the band. They immediately begin working on a hit single that can double as the band’s signature statement.

Cherie’s onscreen audition in a ramshackle house trailer is the point of conception when the music, the attitude and the Rock come together. Fowley hunches over the girls, his 6 foot 5 frame barely clearing the ceiling. Baring fangs and hopping back and forth like a deranged animal on amphetamines, he spews out equal parts genius career advice and humiliating bile. “This isn’t women’s lib, it’s women’s libido,” he howls. “I want them to see the claw marks on your back. I want you to fuck the world!” Intimidated and flustered, Curie gathers herself and begins to sing – all the isolation and hurt of a broken home channeled into eight words and a stutter, “Hello Daddy, Hello Mom, I’m your Ch-Ch-Ch-Ch-Ch Cherry Bomb.”

Shot with passion and dazzling visual flair by music video director Floria Sigismondi, The Runaways follows the band as they set out to conquer the world. Fowley’s boot camp regimen (his pals hurl dogshit at the group as they rehearse) serves the ladies well and they are soon a smash at house parties, dodging the cops and wondering where all the money that Fowley hides from them has gone. At night, the suburban bad girls gather in the shadows of the brightly lit Hollywood Sign to confess their sins and guzzle booze swiped from their parents’ liquor cabinets. In short time, The Runaways tight mix of tuff girl lyrics and bubble gum metal lands them a record deal and a successful, frenetic tour of Japan. 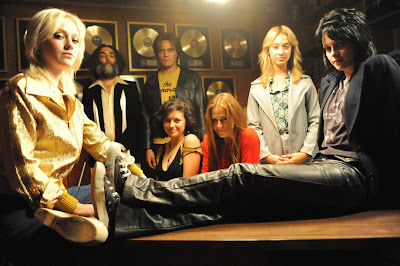 Though the rise, fall and redemption framework for this rock and roll storyline has been re-worked countless times, The Runaways holds up well, standing on its own (sometimes wobbly) two feet. Adapted from Cheri Currie’s 1989 autobiography, Neon Angel, the film centers on the fragile and intense relationship between Jett and Currie. It’s a bond that evolves from casual friendship into a deep co-dependency and occasional physical intimacy.

Kristen Stewart is an uncanny dead-on double for Joan Jett and captures Jett’s panther-prowl walk and indomitable drive as the heart and conscience of the band. Jett, who co-produced the movie with longtime manager Kenny Laguna, was an advisor on the set for much of the filming, and the quality control shows. At one point, she reportedly advised Stewart to “keep your pussy to the wood,” whenever she held the guitar. While it would have been easy for Stewart to overplay the role, she opts for a more subtle and understated approach, communicating more with her eyes and what she does not say.

Unfortunately, Dakota Fanning leaves more to be desired in her portrayal of Cherie Currie. After a terrific beginning, Fanning rarely displays the emotional depth needed to support her physical gifts for acting. As her drug use and sexual commoditization increase, she slips into zombie mode, sleepwalking through much of the second half of the movie, recycling countless fallen rock star clichés – at one point, stepping on a pill with the heel of her platform shoe and snorting the crumbs off the floor. Currie’s long-suffering, supportive twin sister Marie (Elvis Presley’s granddaughter Riley Keough in a nice piece of work) slaves as an employee at a Pup and Taco, while Cherie gets the star treatment, taking off for weeks on international tours. The competitive nature of their tense and loving sister-to-sister dynamic is decidedly underwritten and screams for more plot development.

As the original line-up of The Runaways reaches the end of its two-year life cycle, the members begin to splinter apart from boredom, substance abuse and the inevitable personality conflicts. The band no longer seems to need Kim Fowley, and his manipulative Svengali act wears thin. Slipping further into grandiose logic and self-referential dementia, he has noisy sex on his desk while taking business calls. Michael Shannon tackling the character of Kim Fowley is the uncovered gem here. Cuter and cooler than Fowley ever was, Shannon steals every scene. Part football coach and part voracious pimp (legend has it that the real tension between Currie and the boss was the result of arrangements he made for her to “date” bigwigs in the music biz), Shannon is brilliant at portraying the slime beneath the bottom of the barrel. He’s perfectly aware that it’s mostly about sex, but gives the girls the shaky impression that they are somehow in charge of it. When the manager books a semi-porn photo shoot for Currie on the side, the resulting fallout hastens the band’s demise.

Given that it’s a semi-fictional story about very real and well known personalities, The Runaways is a surprisingly satisfying film. Even though you’re acutely aware that only a small portion of the band’s tale is being told onscreen, no one leaves the theater feeling cheated. But it is unfortunate that Jackie Fox is never mentioned by name. Her role as the bass player is reduced to an anonymous background character. A powerful entertainment lawyer who was in the same Harvard class as Barry Obama, Fox refused to sign over her story rights and the filmmakers wisely left her out, as nothing halts production faster than a nasty lawsuit. The good news is how exceptional The Runaways music sounds onscreen. Fanning and Stewart sang voiceovers to the band’s best songs and the driving soundtrack jolts you right out of your seat.


To anyone like myself, who was there in the flesh and watched The Runaways evolve through various incarnations, this movie is one of those head-shakers where you leave the theater just marveling at how cool it is that they got so much of it right – and happy that the flick made it to the suburban neighborhoods these girls came from. I’m sure some people reading this have similar stories of their own and wish those mini episodes could be included in a comprehensive 42-hour Runaways retrospective. Here are a few of mine.

In 1979, I was an equipment grunt at a studio called Quad Tech, located on 6th Street near Western Avenue in Los Angeles. I wanted to be a recording engineer and was serving a loose apprenticeship under Pat Burnette (his dad was Dorsey Burnette). Pat later went on to engineer Fire of Love, by The Gun Club, and the soundtrack to The Decline of Western Civilization. Downstairs in Studio One, Joan Jett was producing a crew of punk rockers called The Germs and they were making a record that would become GI. Of course, nobody at the time knew how important this would be thirty years later. After all, it was Hollywood in 1979, and everybody had some kind of band that was gonna make it. Though the recording sessions at Quad Tech were closed, I did occasionally run into a quiet and somber Joan Jett wandering the hallways looking burnt out and worse for the wear. Joan’s band had fallen apart and she had yet to launch her mega-successful solo career.

I also remember the unenviable job of cleaning up in the studio after each session, making sure the Mariachi band or whoever they had booked the next day could set up with some degree of comfort. The microphones that singer Darby Crash used were usually a mess, covered with spit and various unknown substances. We had to flip a coin to see who cleaned them. Drummer Don Bolles would often smoke people out and ask where the parties were.

Several years later, in 1982, I was writing live music reviews for Bam magazine and my editor Dave Zimmer was a little concerned that I had recently met Jackie Fox at the Country Club and arranged to review a band that she was managing. He vaguely wanted to know if it would be a well-balanced review and what my relationship was with Jackie. I asked him, “The truth? The truth is my relationship with Jackie is, ‘I wish.’” Anyway, I met her for drinks at Madame Wong’s West. We grabbed a booth and watched her band and it was a great evening, and I still remember the name of the group and that I wrote something fair (on the positive side.)

I saw The Runaways play at least a dozen times, including their "farewell show" on New Year’s Eve 1978 at The Whisky. I was upstairs, hanging with my roadie bro Barry Smith in the backstage hallway. David Lee Roth was in a full cast after breaking his ankle jumping into the air for the back cover photo for Van Halen II. Diamond Dave was bumming Marlboro Lights off me, and Donny Most from Happy Days was loitering at the bottom of the stairs, apparently lacking the velvet rope connections to get in. Right before the girls hit the stage, Barry, Lita Ford and I were in a tiny closet doing a little blow. There was a knock and a whiny familiar voice asked to be let in. It was Rodney Bingenheimer and Lita replied with three words that I will never forget – “Go away Rodney!” It was the only time I ever saw “The Mayor of the Sunset Strip” turned away at the door.