Last Call for The Road Warrior
August 8, 2006
By Brian Bentley 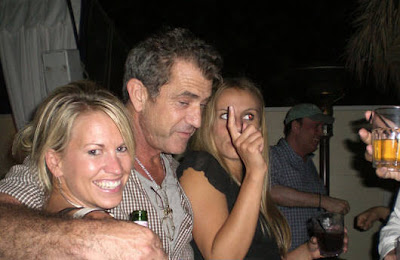 Last Saturday morning, around 3 a.m., I had an epiphany of sorts. I was driving near Malibu at 85 mph. on Pacific Coast Highway when the face of Mel Gibson appeared in the clouds above. At first, I did not recognize him. Once, he had been young and invincible. As the leather-clad vigilante cop from Mad Max, Gibson was a punk rock superhero gazing out across apocalyptic landscapes with a heartless, blank stare of nothingness and rage. Now he appeared before me as an old man, a despondent Charlton Heston playing Moses. Still it was undeniably the voice of Mel that thundered down from the heavens.

I had to be hallucinating. After all, I was stoned on various substances, cranking the tune “Freebird” and determined to wrap myself around a telephone pole at the exact moment the song reached its three-guitar crescendo. I’d finally made up my mind to copycat Allen Collins (Lynyrd Skynyrd’s driving-challenged guitarist) and end it in a blaze of twisted steel. Life had become a bipolar mess. The pillars that propped me up had dropped one-by-one, like soldiers on the beach at Normandy. The night before, while watching Vanishing Point, I found myself actually laughing as Barry Newman, bathed in white light and smiling in mad anticipation of his deliverance, smacked head-on into destiny and a tractor-filled CHP roadblock, turning a perfectly good 1969 Dodge Charger into an exploding fireball.

My mind was made up and now Mel Gibson was ruining everything. His words shook the floorboards. “My son, you are special. I cannot bear to see you suffer like this any longer.”

What a time to start hearing voices. “Leave me the fuck alone,” I screamed out the window as the face above the highway kept pace with my front grill. Panicked by this unexpected development, I began reciting Gibsonian dialogue. “I am the Nightrider! That’s right, you shitfaced psychopathic aborigine… I am Peter Fonda … I am Adam Roarke! I ride the Night Sky straight into hell … you of all people should understand!”

Mel’s florid mug hung closer to the ground and I could tell he had been drinking. “Do not do this,” he implored. “You still have much to accomplish, don’t let them win, keep fighting, like I did in Braveheart. Drive a sword through those who would destroy you.”

The car began to shake violently like the wheels were coming off and then it seemed the vehicle was almost flying on rails, an amusement park ride, maneuvering on its own accord, effortlessly handling each hairpin turn, nearly leaving the ground. Suddenly, at the speed of computer graphics, Gibson morphed from specter into human form and then he landed right in my passenger seat, a very suicidal Martin Riggs, sporting a Lethal Weapon mullet and trying to wrestle the wheel out of my hands.

He was bellowing into my ear like a madman. “You want to die fucker? You really want to die? Are you really ready to do this? Hey mate, I’m the one who wanted out and now, they’ve delivered me to a fate worse than death! My life is truly, truly FUCKED!”

I tried to straighten the front wheels but Gibson was literally on a roll. “I could have stayed behind at the bar, gone home and spent the night with that waitress, and now, it’s the whole world that wants to screw me. Sanctimonious swine! What skeletons they got in their closets, eh mate? I know. I know they’re going to tell me, ‘Mel, you must go on Diane Sawyer, you must do the full confession to People. Get on your knees and pray for a second chance and please, dear boy, would you mind wearing a beanie for the cameras while you’re at it?”

It was at this moment that I realized I was dealing with a guy who was even crazier than me. He jammed his left foot down on the accelerator. The car jacked up on its two right wheels and when it found its four feet again, I mashed the brake pedal to the floor. The vehicle skidded for quite some time and then went end over end, landing miraculously in one piece without as much as a scratch.

Adrenaline and sheer terror can be a mother and like electroshock it snapped me out of my terminally depressed state. I felt different. Something elemental had changed.

By this time, Gibson’s booming baritone and whisky breath were wearing thin. He was giving me a splitting headache. I thought of pepper spraying the blowhard bastard with my free hand, but finally gave in and let go of my grip on the wheel as he gently steered us into a parking lot off PCH.

On the car radio, “Freebird” had segued into a .38 Special song and the mood was forever broken. Something very paranormal had just occurred and it made me realize that there are some fates worse than death. One of them is to be trapped in a car with a drunk Mel Gibson.

Looking at him now, it was hard to believe that just eight short days ago, he had been a respected, Teflon-coated box office superstar. He had boozed and brawled but still walked on water – a guy’s kind of man and a pin-up boy for suburban hot tub mamas everywhere. But in the age of instant information, eight days is an eternity. Now the good guy story was old news, now he was damaged goods.

Credibility is like virginity, it’s an innocence lost that can never be restored. The cottage industry that thrives on celebrity crucifixion made sure of it. The self-righteous players surrounding the movie studios, all the industry rats who reap enormous profits from exploiting the darkest sides of human weakness had circled their wagons around the “J” word and in these “sensitive times” (you mean 24/7 World War?) Gibson’s soggy soliloquy to the traffic cop was the dumbest, most ill-timed career move since Hugh Grant stopped along the Sunset Strip to roll down his window.

At least for the time being, Mel Gibson was an outsider, just like me. And for that reason only, I decided to finally forgive him for making What Women Want.

“Dude,” I told him, “thanks for stepping up like that … nobody else bothered to.” “Not a problem mate,” he replied. He reached into his pocket and produced a golden whisky flask. “Want a snort?” he offered.

Gibson stared off into the night and his eyes began to mist and glow. “You know,” he intoned, “Jesus Christ was all about forgiveness. But religion, religion isn’t about forgiveness anymore. It’s all idol worship, my idol against your idol, my God against yours. Besides, they got it wrong. I never said I actually owned Malibu.”

The question was begging to be asked. “Mel,” I said, “Why the fuck did you pick on the Jews? Jesus man, what were you thinking? Couldn’t you have ranted on about despising Paraguayans or loathing Turks or disemboweling Canadians? I mean nobody gives a pine tree about a Canadian…”

My words trailed off and Gibson shook violently for a moment. His physical form began to change dramatically. His face became a face without pity, the face of Officer Mad Max Rockatansky, a face who had seen hell and lived to make others regret it. There wasn’t a trace of forgiveness in those cold blue eyes. In the end, I guess, life has a nasty habit of grinding all of us down. For years, Mel Gibson’s hubris had been a shovel and he had finally dug his own grave with it. Like Max, the circling vultures could smell his blood, the scent of fresh road kill.

It was obvious that the incredible death-defying evening had come down to this one defining moment. His eyes narrowed. He stared at me with malevolent intensity. I could see this one coming long before he opened his mouth.