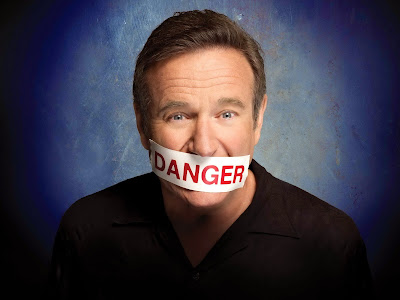 Robin Williams, who was found dead at his home in Tiburon, CA at noon today, was a giant of film and comedy and his shocking celebrity suicide has rattled the nation in a manner not seen since the death of Kurt Cobain. Whatever you were doing, when you heard the news that Williams had killed himself, the sobering effect dominated your thoughts for the rest of the day.

How could it not? Robin Williams was an actor who made us feel good to be alive whenever he walked into a room. He was 63 and in the twilight of his career – but what a career it was. The traditional media can provide an exhaustive list of his credits and a complete blow by blow retrospective. But how about the movies “Good Morning Vietnam,” “Dead Poets Society” and “Good Will Hunting,” for starters?

Williams’ cinematic masterpieces came long after he had helped define the essence of drug-fueled comedy that ran manic through the streets of the 1970’s like a coke fiend on fire. Richard Pryor and George Carlin re-invented comedy and set the stage for Williams’ contemporaries like John Belushi, Andy Kaufman, Dan Aykroyd and Steve Martin. “Crazy” was the term that defined most of these acts. There was silly-crazy like Martin’s “wild and crazy guy;” smartly-cynical crazy like Aykroyd; weird, foreign-guy wacky like Kaufman and stone cold fucking nuts crazy like Belushi and Pryor – two radically creative comics who seemed intent on capping their volatile careers with early exits.

It is impossible in 2014 to appreciate how new and exciting all this was in 1978, but the country had emerged from a relentlessly repressive decade of war-mongering, assassinations and racial turmoil. People were fed-up with “the establishment” and lies and bullshit and Watergate and bummers of all kinds. Society was suffering from a sense of collective nihilism and anarchy was a popular notion. Punk rock stars were singing songs declaring there was “no future” and whether you subscribed to that bleak a philosophy or not, everyone seemed to agree it was time to let it loose and party.

Comedy and music took the lead in burning the candle at both ends. Drugs, decadence and living on the edge were badges of honor and achievement. Back then, the country was addicted to the image of hard living and getting high the way we are junkies for Facebook now. Guys like Belushi and Pryor and Keith Richards were considered marvels of modern medicine and self-determination.

Robin Williams wound up on the cover of Rolling Stone with his inventive, hit TV series, “Mork and Mindy.” He was a superstar stand-up comic known for boundless energy. It was exhausting to watch him work a stage and impossible to separate his amped-up routine from his offstage personality. To keep that rush going, he did copious amounts of cocaine, often in the company of his fast lane peers. Nobody has ever provided evidence, but it’s apparent to anyone who followed this story that Williams was shooting speedballs along with John Belushi at the Chateau Marmont Hotel the night that Belushi OD’ed – and managed to get out of town about five minutes before the cops slapped him with a trumped-up conspiracy charge that would have fallen apart in court but dealt a severe blow to his brazenly clean-cut public image.

Surviving those times, when many of his professional friends did not, was no mean feat. But Robin Williams (who was never a cast member) did something phenomenal that most of his buddies from the original Saturday Night Live could not – he became an extraordinary dramatic actor who made great movies. There was often a sly sadness and wistful melancholy ingrained in his roles and this was reflected in his private life. Williams entered rehab on numerous occasions and confessed in interviews to prolonged bouts with cocaine, alcohol and depression.

In one of his greatest roles and certainly against type, he played a lonely, creepy photo-processing clerk in “One Hour Photo.” As Seymour Parrish, Williams stalks a young suburban family, using their cheerful and “normal” photos to fill the holes in his empty life. While his character spins down a drain of psychosis and obsession, Williams enters into uncharted waters for a comic actor. The aching sadness in his eyes and longing for human contact chillingly capture the insecurities in all of us to belong.

After the events of the last 24 hours, it is difficult to know just how much Robin Williams was acting in real life. When a man who seemingly has everything – money, family, prestige, a beautiful home overlooking the San Francisco Bay, decides to take his life, it sends a message to us all that depression does not care who you are or what you have accomplished, just what you are missing and what you believe you lack and will never attain. That loss of purpose is more dangerous to one’s survival than any drug.

As the Boomer generation drifts into their final years, there has been much discussion that suicide will become a natural and increasingly popular remedy for the slow and painful disintegration of old age. When an accomplished and respected director like Tony Scott has the strength and willpower to climb a bridge scaffolding to leap to his death, one wonders if these precedents had an impression on a fitness freak like Robin Williams, whose body was fit enough for marathon bicycling but whose mind and heart had quit. Williams has several films yet to be released and these will be viewed, as will all his work, with a fresh perspective and a search for answers to the kinds of questions that can never be answered.